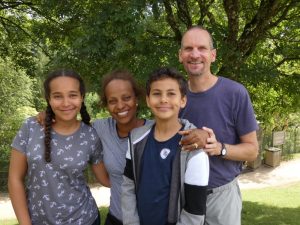 Andy & Haimi have been married for twenty one years and have two children in High School. Andy, who is British, has lived in Ethiopia for twenty years. He taught for two years at a rural bible school in Soddo, southern Ethiopia before moving to Addis Ababa, where he was involved in teaching and administration at the Evangelical Theological College for the next six and a half years. From 2011 to 2014, Andy was Project Manager at Bingham Academy where his responsibilities included leading the school through accreditation with the Association of Christian Schools International (ACSI), fund-raising for the new High School building and instigating a school-wide database. Andy has a Masters degree fro the University of London in Applied Educational Leadership and Management.

Haimi was born and raised in Addis Ababa. She attended Commercial College where she completed her Diploma in Secretarial Science and Office Management. After marrying Andy in 1999, Andy and Haimi moved to the UK for two-and-a-half years during which time Haimi studied for a Diploma in Counselling and Theology at the London School of Theology. Upon returning to Ethiopia in 2003, she started working for the Summer Institutes of Linguistic (SIL) in Personnel.

Both Andy & Haimi are actively involved in the leadership of RICE; Andy as Executive Director and Haimi as Director of Character & Community Development.

Our Director for Teaching & Learning is Wro. Enatenesh who has been with RICE since the beginning in August 2014. She initially taught a joint class of Year 3 & 4 in her first year, and then recognising her leadership abilities, Enatenesh was asked to join the leadership team in August 2016 as Deputy Principal.